Heads of States and other global leaders convened at the Peace to Prosperity Workshop in Bahrain, organised by the Presidency of the United States of America in partnership with the host government, the Kingdom of Bahrain, to launch the US growth strategy for Palestine and the Middle East; a first step in the long journey towards establishing an enduring future for the region; the West Bank, Gaza, and beyond.

Providing the African perspective upon special invitation from the US Government, Tony Elumelu, Founder, the Tony Elumelu Foundation and Chairman, the United Bank for Africa, headlined the summit, speaking on the opening plenary alongside Christine Lagarde, Managing Director, International Monetary Fund (IMF); and HE Mohammed Al-Sheikh, Minister of State & Member of the Council of Ministers, Kingdom of Saudi Arabia, to share practical recommendations to unlock future economic prosperity for the Palestinian people, using what is done at the Tony Elumelu Foundation as a replicable model for the economic empowerment of young men and women from the West Bank and Gaza.

Elumelu stressed the urgency and importance of supporting and empowering young Palestinians to ignite the entrepreneurial ecosystem and strengthen the Palestinian economy. For stable growth, he reiterated that young Palestinians must be empowered with jobs and economic opportunity to contribute meaningfully to their nation’s development. 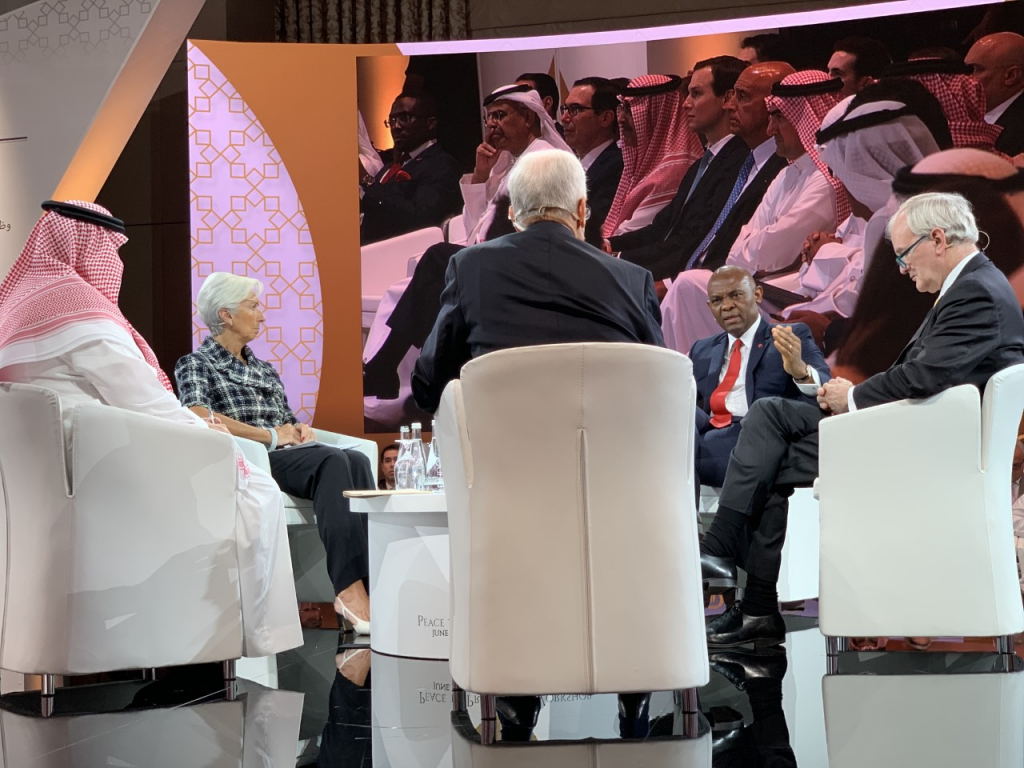 “I come from Africa; and the reality is that we do have a lot of similarities with the Palestinian people; especially in the area of demographic make up. With over 60% of its nearly 5 million strong population under 30, the young people of Palestine need Jobs Jobs and more Jobs! Without jobs, there will be no economic hope. Big corporations and government alone cannot supply the jobs demanded by Palestine’s demographic pressures. We need SMEs and startups to address joblessness in the region, create jobs and opportunities in local communities for millions of our Palestinian young brothers and sisters to become employed, meaningfully engaged, and full of economic hope, which in turn leads them away from extremism.”

The renowned investor and philanthropist who is leading by example through the Tony Elumelu Foundation which has committed US$100m to empower young African entrepreneurs called on endowed Middle Easterners and their philanthropies to step up and become more involved in empowering the young ones of Palestine. As he explained, “In the 21st century, we cannot keep relying on western donors to help empower our own people; we must step up and create a platform where they may partner with us for scale, just as we are doing at the Tony Elumelu Foundation.”

The Tony Elumelu Foundation annually identities and empowers entrepreneurs across all of Africa’s 54 countries with a non-refundable seed capital of $5000 each, mentoring and training, and in over five years, has supported 7,520 young Africans. To resolve joblessness in the region, Mr Elumelu offered his Foundation’s unique economic empowerment model to be replicated in Palestine. “Young Palestinian people need similar opportunities like the ones we currently give young African entrepreneurs through the Tony Elumelu Foundation. We acknowledge that given Africa’s huge numbers, we are touching only a top of the iceberg, but we have seen first-hand how this model transforms individual lives, families, communities and cities.” 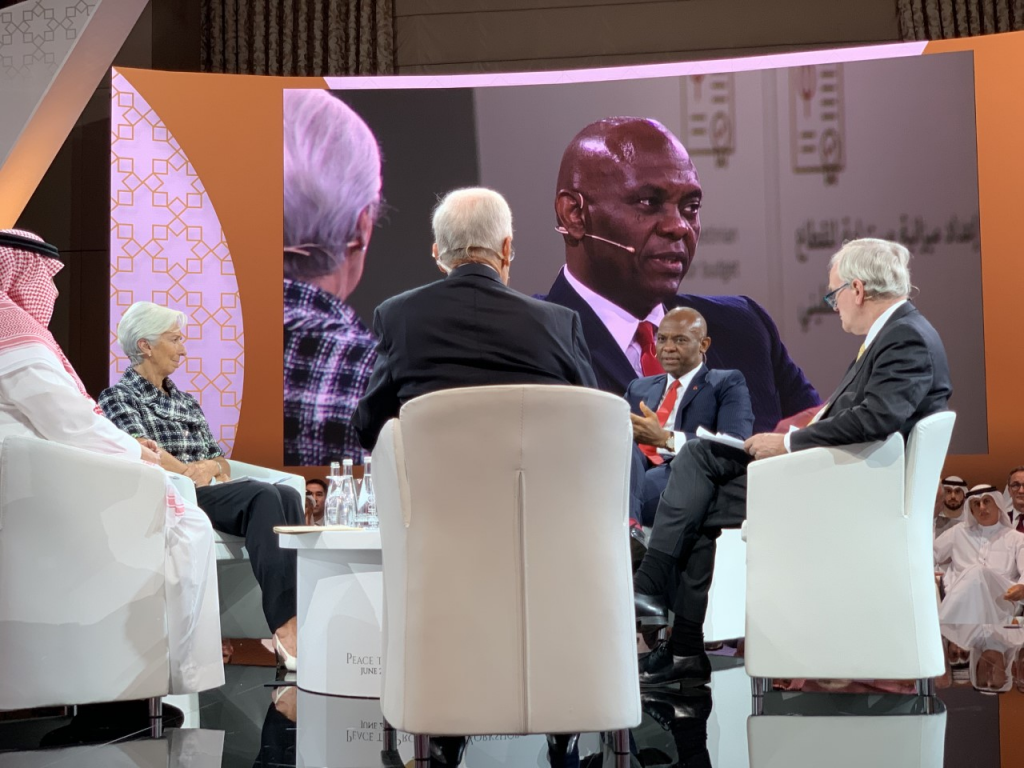 Agreeing with Elumelu on his call for an increased focus on SMEs and young people, Saudi Arabia’s Minister of State Mohammed al-Sheikh, stated: “The younger population and proper planning is essential to creating economic prosperity in the West Bank and in Gaza. If you look at the demographics in the region, it is a young population. As the Kingdom of Saudi Arabia looked to diversify its economy and carry out the structural changes to be less reliant on oil revenue, this required real commitment and hard work and buy-in from everybody, with small-to-medium enterprises at the front and center of the Kingdom’s Vision 2030.”

Elumelu also called on the government to play its own role in supporting and prioritising the young people of Palestine: “Governments must play their own role: ensuring good governance is in place, prioritising infrastructure and the fight against corruption, and creating an enabling and conducive environment so that when these young Palestinians get opportunities, they can succeed.”

He continued: “As an investor, something that speaks volumes to me when I want to choose a country to invest in is this: is the private sector in that environment doing well? Do they have small and medium scale enterprises that are flourishing? This to me is the real signal of how successful my investment will be because what it is good for local investors is good for international investors. If economic conditions for local investors are not favorable, they can’t be for foreign investors. The government must ensure that local SMEs thrive to signal to the global investment community that Palestine is open for business.” 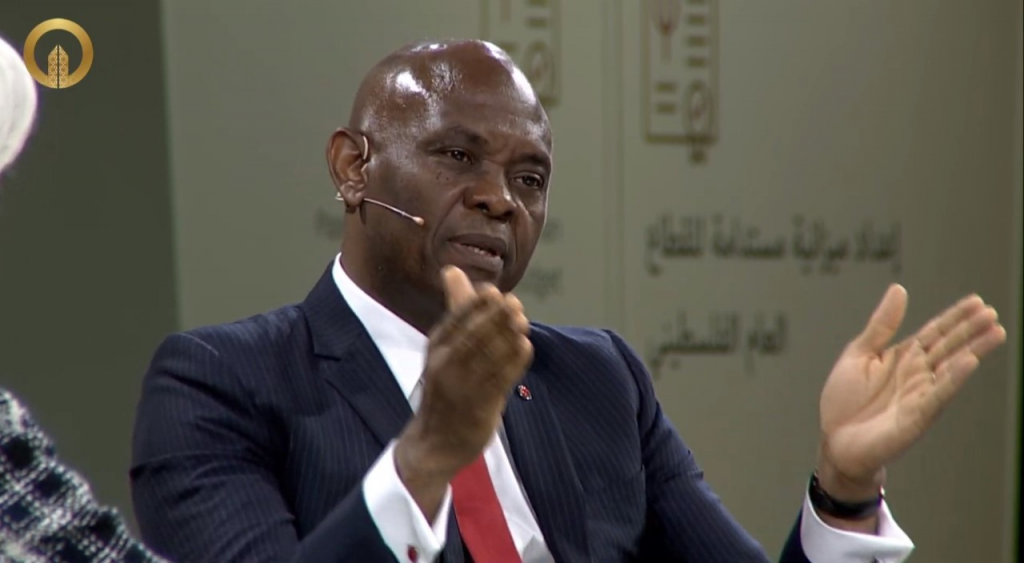 Joining Elumelu in advising on the role of the government in creating a conducive environment for the private sector, Christine Lagarde, MD, IMF added, “We have seen a pressing need for capacity development in the field of public finance management, central bank strength and domestic revenue mobilization. These are the background in which private sector can have a predictable environment within which they can operate.

Advising development agencies on a more inclusive model for even greater impact, Elumelu stated: “Development agencies should also not sit in their offices abroad to design growth programmes and strategies for the Palestinian region, but must ensure that the people of Palestine are actively involved in pulling their people out of poverty. Development agencies must assist in a strategic manner, working with local partners who understand local nuances, so that the over $19 billion spent so far by the World Bank and allied institutions on innovation and entrepreneurship is more impactful, transforms more lives and addresses the real issues on ground.”

In conclusion, the founder of the Tony Elumelu Foundation commended the US Government for this timely initiative and intervention but counseled on the importance of longevity and sustainability. “For what we are gathered here to be sustainable, endure over time and lead to sustained prosperity, we must involve the Palestine people. Until we collectively agree that any economic plan we put in place for Palestine and the region must be anchored by and on the small and medium scale enterprises to be permanent and fundamentally address the issues, we will continue to rely on quick fixes. We must prioritise inclusive growth that brings all to the table – women and youth especially – which in turn will create more hope and beget more security and peace. To achieve this, there must be a collaboration between the Palestinian people, friends of Palestine, neighbours of Palestine, and led by the wealthy and endowed elite in the Middle East, to work together to economically empower young Palestinians. It is not too difficult a task for us to touch significant numbers out of the 2-3 million youth in the region.”

He continued, “The Tony Elumelu Foundation is ready to deploy our expertise in collaboration with the wealthy elite from the Middle East region, to create an affirmative plan, and send a strong message of hope for the Palestinian young people. If we prioritise them and create the right future for them, we will signal a new beginning in this part of the world. Only then will we achieve security and peace permanently because these young people will become inclusive stakeholders and the true champions of prosperity.”